While planning a trip to France, it is important to pick the best time of year to capitalize on the weather and other seasonal activities. France’s expansiveness gives rise to various regions and climate zones, making picking the perfect time tricky.

The overall best times to visit France are either in the Spring or Autumn. There will be fewer crowds than during the summer months, and the temperature will be comfortable for spending time outdoors.

Read on to learn more about the seasons in France and what you can expect during whichever season you choose to visit.

The Seasons in France Explained

France is situated on the coast of Western Europe. Its climate is heavily controlled by the Atlantic Ocean wind currents, as well as its altitude, air pressure, distance from the sun, and topography.

France is a lot bigger than most people realize. It stretches about 600 miles from north to south and east to west and is the third-largest country in Europe, following Ukraine and Russia. Because of this, France has multiple climate zones that influence its seasonal and regional weather.

France has approximately four climate zones, including the oceanic zone, continental zone, alpine zone, and Mediterranean zone. These are classified by the following characteristics:

As you can see, the climate zones across France vary a lot. Depending on where you go in France, this can affect what time of year is best to visit.

What Seasons Can You Expect in France?

France has all four seasons: summer, fall, winter, and spring. Though these may look different in various regions across the country, they are more or less what you expect.

The various season in France fall between these general months:

Spring: March to May

In France, summer is usually warm and crowded, while winters are cold but have far fewer crowds. Spring and fall are more moderate months with respect to both temperature and tourists.

In general, the fall and spring are the best time to go, simply because there are fewer people and you don’t need to worry about it being too hot or too cold.

However, every season is a great time to go to France. Each of them offers a little something special that you could not experience during the other seasons.

Most of France does not have that insufferably humid summer heat. Though it can get hot, the average temperature falls around 75-80°F. The only downside of France in the summer is the crowds.

Exploring the nature of France in the summer is remarkable. The country’s national parks are native to an array of creatures and plant life and stunning hiking trails and rivers to fish, kayak, or swim in.

Summer is one of the best times to visit the coastal towns of France situated in the Mediterranean climate zone. The heat is dry and enjoyable.

August 15: Assumption of the Virgin Mary

Best Places to Go During the Summer

As the warmth of the summer begins to cool, France becomes increasingly cozy. Autumn is the harvesting season in the country. You will be sure to smell the sweetness of wine and chestnuts in the later months.

The fall aromas mixed with the bursts of colors as the leaves change and fall make France exceptionally pleasant in this season.

There are an array of autumn festivals for you to enjoy on your fall trip to France, full of wine, spices, and local seafood.

Best Places to Go During the Fall

France’s climate regions have an extremely varying degree of severity when it comes to the winter. While the mountainous south has biting cold temperatures, coastal and central France is usually moderate, even in the dead of winter.

Like the summer, French winters are not too severe for most of the country. It is more common for the winters to be wet than snowy. However, in the more mountainous regions of the country, you will be sure to find lots of snow.

Best Places to Go During the Winter

If you want to head out to the French countryside or meander through small towns surrounded by blooming colorful buds, spring is one of the best times to go. You can enjoy warm weather that’s not too hot while getting a chance to witness France’s natural beauty.

Best Places to Go During the Spring

Here are the French-language equivalent of the four seasons:

Plan Your Trip to France 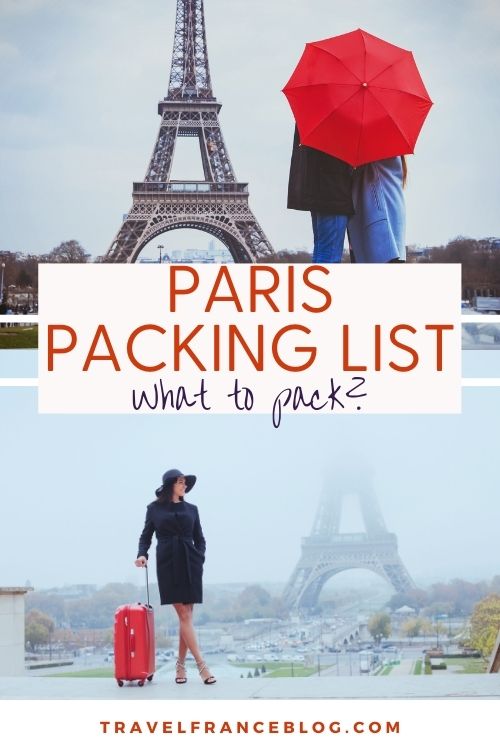 So you have decided to pack for Paris? Congrats! You are in for an amazing time. Even if you have been to Paris before, it’s always good to be prepared. Wondering what to wear to Paris? Packing for Paris can be tricky because you want to be fashionable but also comfortable. Planning a trip to… Traveling around Europe is not cheap, and France is by far (along with the UK) the most expensive destination in Europe. So it is very likely that you are thinking about how to travel around France on a budget. Is it possible not to break my bank? Where to cut or how to spend less?… Paris is usually a “must” destination on trips both to France in particular and to Europe in general. City of fashion, light, and cinema, capital of France but also of the 19th century and fundamental to understanding the 20th century… Can you reach a certain number of days to get to know this endless city?… If you’re looking for an idyllic European region to visit, look no further than the south of France. With its rolling lavender fields, ancient villages, and delicious food, Provence, France has something for everyone. Here’s our guide to this charming region. Whether you’re exploring the countryside on foot or bike, stopping off at picturesque villages… Traveling to Paris is always both an interesting plan and a logistical challenge. It is necessary to combine the will and expectations of the first visit with the specific conditions of the trip: the season, the days available, the budget, and the availability. There is so much to see in Paris! No wonder Nicolas Barreau… France is an incredible country with many different regions offering unique activities, sights, and adventures. One of the best ways to see as much as possible in this beautiful country is by taking a road trip. Planning a road trip can be a difficult task. However, you need to plan and prepare as much as…